[Excerpt from a scrapped draft of the novel-in-progress, Those Who Create and Destroy.]

ELISHA’S BODY LURCHED as a fresh hex seized him. His skeleton strained and warped as his last protective ring fell in shards from his hand.

But the next shot he fired struck true, and not a moment too soon. The maleficer’s knee exploded out from under her in a splatter of blood and bone. She collapsed, howling in agony, then raised her head, teeth viciously bared, and reached out to unleash another hex.

It was at that moment that Elisha’s eyes finally caught hers.

The blackness swirled in front of his gaze.

In a torchlit clearing under shadow of night, a small throng of people in black hoods gathered around a masked man wearing a cowled robe of murky dark gray. They strained for a touch of his hand. Elisha felt a swell of love and gratitude.

The Patient Father. The Almost-Holy. He is the purest of all beings, but he does not deny his own impurity. He claims the sins the rest of the world disowns.

“The dogs will devour one another,” the Patient Father said, in a voice like a whispering choir. “Then, at last, our way forward will be clear. Will you stand with me, my brave and broken ones, to greet the blessing of the dark?”

Who are “the dogs”? A spike of anger. The Auctoritas Magicae? Show me how you fucking freaks did it—the May 14th attack.

A jolt of pain. Amelia gave a feeble laugh. Oh, justice-seeker. Look how eagerly you spread your disease.

“The Mother of Abominations has claimed a vessel in this world: a mundane girl,” the Patient Father proclaimed. “She comes at last, in her boundless mercy, to devour the blighted fruit of her womb.”

“Praise to the Holy Mother,” his followers intoned.

Let me in, dammit. Show me where your wack-job friends are. And show me the Harpers; the hostages. The woman and the boy.

More pain. Amelia wailed and wept. Elisha ground his teeth and pushed through it, driving barbed tentacles into the remotest shuttered corners of her mind.

A medley of nonsense flowed into his consciousness—random words and phrases and syllables, along with a glut of images that made him feel as if his sanity was coming apart at the seams: Chipped human teeth trailed by coils of blood, sinking through standing water in a grimy sink. The lipless grimace of a dead dog on a bustling boardwalk, crawling with flies. A wad of spittle exploding against a homeless man’s cheek.

The hideous display began to jumble and swirl, like vomit circling a drain, as a vortex coalesced from the shadows—a point of darkness, cold and infinite. And growing.

Amelia shuddered with relief and awe, and a worshipful fear. Come, Holy Mother. Purge me. Let me be the first of your faithful to return to your embrace.

The emptiness began to close in.

Elisha felt the kind of all-eclipsing terror that makes beasts in traps chew off their limbs. He fought recklessly to untangle himself from Amelia’s mind as she pitched toward the heart of that ceaseless void; as her identity began to unravel, thread by thread.

The vortex stretched its arms toward him, beckoning. Elisha felt at last, keenly, the depth of his own weariness, his anxiety, his bitterness, his loneliness—all those neglected parts of himself he so expertly bundled up and locked away in some dark basement closet of his soul, where they silently festered.

Here was his chance to let it all go. To lay down his burdens and rest.

“Where you going, honey?”

It was earlier that day at the flat, before they’d left for the big party at Dad’s. DeShay stood there cutting the little cake Leshayva had baked. He was looking at Elisha with worry in his gaze. Shay hovered at his elbow, her uncommonly savvy brown eyes darting between her two fathers. Dark tendrils slithered along the edges of the scene.

Elisha felt parts of himself rip loose as he wrenched himself from the death-grip of Amelia’s crumbling consciousness—bits of knowledge and memory lost to the void forever.

In control of his body once more, he dove. A strange force like static electricity tickled his skin, and an absence of all sound rang with more violence than a rocket engine in his ears. For what felt like eons, he hung suspended in the air as he hurled his body away from the grisly circle.

Then, to his horror, he started reeling backwards, toward the very unseen thing he sought to escape. Debris flew past him, pelting his body, slashing the skin of his face. He grabbed desperately onto the back of a still-nailed-down pew and felt it rock on its moorings. His hands began to slip. He dug in with his fingernails, clinging for dear life.

And then, as suddenly as it had started, it ended.

Gravity once more became the dominant force acting on his body. His legs hit the floor hard and slid, the sudden change in direction flipping him over and tearing his hands free at last, leaving shards of fingernail embedded in the wood.

He ended up on his back half-under the pew, eyes closed, panting heavily.

Seconds later, a large drop of water hit him in the face. Then another.

Along with his adversary, half the church was gone, and a large swath of the earth below it, as if a colossus had leaned down from the heavens and taken a bite.

Elisha closed his eyes again, his cheeks splitting in a chuckle as lightning cracked the sky, and a dingy urban rain came hammering down. 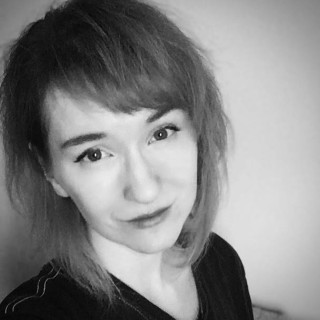